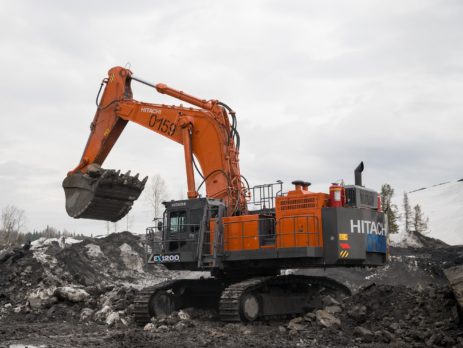 Minetech Machinery commissioned two new EX1200-7 excavators with backhoe equipment in the Raspadsky open pit, which is part of the Raspadskaya Coal Company, which manages the coal assets of Evraz. Machines replaced the old excavators used there since the foundation of the mining company.

EX1200-7 excavators weigh 117 tons are equipped with 567 kW Cummins diesel engines. Both are equipped with a bucket with a capacity of 7 m3, began to carry out stripping and mining operations. According the company’s production plan each machine will be involved in the loading of 170 thousand m3 of rock mass monthly. In 2020 it is planned to mine 1 million 700 thousand tons of coal of OS and KS grades, which are in demand by metallurgists.

New equipment was purchased as part of the Raspadskaya Coal Company investment program to upgrade the mining equipment. Special attention was paid to such characteristics as the maximum working height (more than 12 m), digging depth (more than 8 m) and the loading time of dump trucks with a lifting capacity of 50 tons, 90 tons and 130 tons. Such parameters of the excavator can maintain the continuity of the production process as well as minimize downtime.

New excavators are equipped with LED lights and an automatic fire extinguishing system. To ensure a comfortable operator’s work, the cabin is equipped with air conditioning and an air suspension seat.

“At the moment, excavators are successfully fulfilling the daily plan for the extraction of coking coal. The new equipment is excellent for use in the geological conditions of the Raspadsky open pit. EX1200-7 with the equipment of a backhoe, unlike a straight shovel, allows you to better clean low-power and steeply falling coal seams from rocks due to the ability to remove soil below the parking level of the machine. Thanks to this, the best indicators of coal ash are achieved. So far, these excavators are the only mining machines manufactured by Hitachi used in the Raspadsky open pit. In the future, replenishment of the fleet of equipment with Hitachi equipment will depend on how efficiently they prove themselves in the EX1200-7, ”says Roman Mezhov, chief engineer of the Raspadsky open pit.